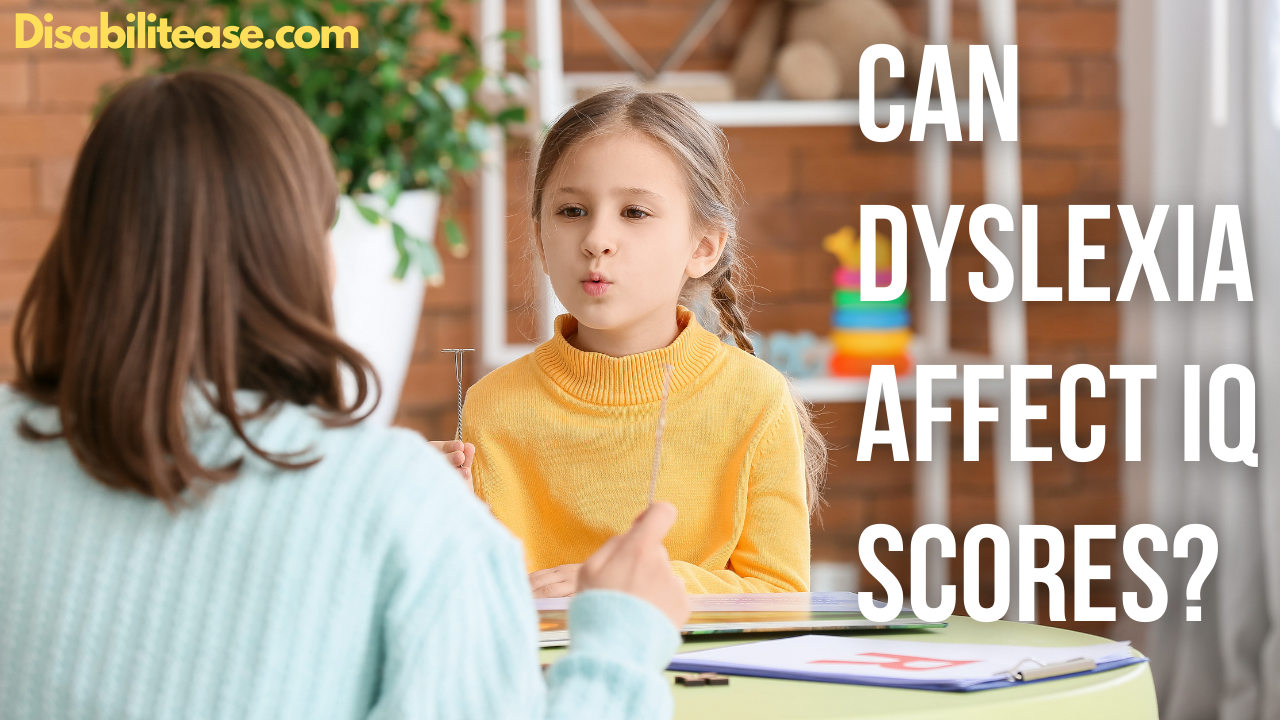 Can Dyslexia affect IQ score? Let’s discuss. Dyslexia is a learning disorder that impairs one’s ability to recognize, decode and spell out letters, words, and digits.

As with any other disorder, it can vary in severity, but its symptoms remain the same in most cases. It must be understood that not all poor readers have dyslexia.

People with Dyslexia have a hard time recognizing words and letters even after receiving proper tuition and support.

Also, make sure to check out my post on 10 Worst Fonts For Dyslexia: The Ultimate Guide

What differentiates people with dyslexia from regular poor readers is their inability to decode and understand words even if they had previously learned and successfully spelled, read, and understood them.

Previously, Standard IQ tests such as the WISC and BAS tests were used to identify children who may have Dyslexia. However, psychologists and educationists now oppose the approach as it relates overall low scores to having Dyslexia.

Schools and psychologists have long used such IQ tests to identify both gifted and slow learners. While testing young students for their IQ is often criticized due to multiple factors, the results can also help a disadvantaged learner get more intensive support.

How Can Dyslexia Affect IQ Scores?

The WISC-V is the standard IQ test for children between ages 6 to 16 and includes a range of sub-tests. Its main subtests include Verbal Comprehension, Fluid Reasoning, Visual-Spatial, Processing Speed, and Working Memory.

As can be expected from the subtests, dyslexic people are usually at a disadvantage and often get lower IQ scores. Some of the IQ indexes and their implications for Dyslexia are explained below.

The visual-spatial subtest assesses a child’s ability to recognize, understand and create visual details. Dyslexia impairs one’s ability to accurately and fluently decode visual elements; one of the main reasons they are poor readers. This impairment is reflected in the consistent low IQ scores on the subtest.

The image below compares the visual-spatial scores (VPT2, VPT4, and VMI) of children with Dyslexia and normal readers.

Another WISC-V subtest is Fluid reasoning, the ability to understand, arrange and problem-solve various visual elements. Because Dyslexia doesn’t allow fluent decoding of such visual details, dyslexic people often find it hard to solve puzzles, arrange geometric shapes and figure out the relationship between different elements.

Moreover, even when they are able to decode the shapes, the pace and fluency can still impact how well they perform.

Task: Choose the 3 shapes that can be combined to complete the shown puzzle.

(A sample visual-spatial question on the standard WISC-V Test.)

This subtest is all about assessing a person’s ability to attend to, concentrate on and remember different types of auditory and verbal details. In most IQ tests designed for children, this index will include tasks related to remembering a certain digit span, sequence, or visual pattern.

Multiple studies have found that dyslexic children get relatively lower digit span scores than other students. Having bad recall for a digit span, both forward and reverse means their performance is also limited on this index.

Below is a comparison between WISC-R IQ scores of three subgroups of children with Dyslexia and the control group.

(Data collected in a 2004 study on digit span in dyslexia)

As can be seen, the dyslexia subgroups received lower scores overall in the WISC-R test. The scores further deteriorated on the “Digit Span 2” test, where backup strategies such as counting on your fingers or visualizing were restricted.

The study also found that dyslexic children face increased challenges when recalling serial, backward or forward digit spans. This is due to their limited working memory and inability to absorb and memorize information quickly.

Most dyslexics face challenges with different visual functions, such as the ability to filter out visual information, utilize working memory, and retrieve vital information quickly. Regarding reasoning and problem-solving speed, Dyslexia also affects how many tasks your brain can carry out at once. This can result in slower problem-solving as the person absorbs, relates, and uses the various elements one at a time.

While the mentioned deficits and impairments are easy to relate to the subtests, it’s essential to understand that every person with dyslexia does not have the same deficits. To clear out confusion and provide more specialized support, the disorder must be divided into two types: auditory and visual Dyslexia.

People with auditory Dyslexia might do worse on reading, while those with visual Dyslexia perform worse with recognizing letters and shapes. Interestingly, a person with Dyslexia might show superior performance in some visual-spatial tests because of their persistent tendency to learn in terms of shapes and images. This is often the case with visual Dyslexia, where children learn compensatory strategies to overcome their decoding deficits.

While individual test scores often show a low IQ score profile for dyslexic people, the overall IQ scores show something different. After compilation of multiple WISC and BAS profiles of dyslexic children, it can be seen that the majority fall in the above-average category.

When seen as a graph, dyslexic people often have a “spiky” profile with many ups and downs. This means their low scores in poor arithmetic, reading, digit span recall, and working memory are often offset by superior performance in verbal comprehension and abstract reasoning.

While People with Dyslexia often perform worse than they should for their age on some subtests, it does not dictate a person’s intellect. IQ tests have long been criticized for being discriminative, non-inclusive, and too narrow. They are also heavily focused on working memory and processing pace, which is further based on visual elements.

Another post that will interest you is about Can Your Dyslexia Flare Up?

In the real world, our success is more accurately determined by our problem-solving, communication, and research skills than fluent reading and comprehension. Various studies have found IQ tests to be irrelevant when it comes to determining overall career and academic success. Therefore, they should not be given too much power.