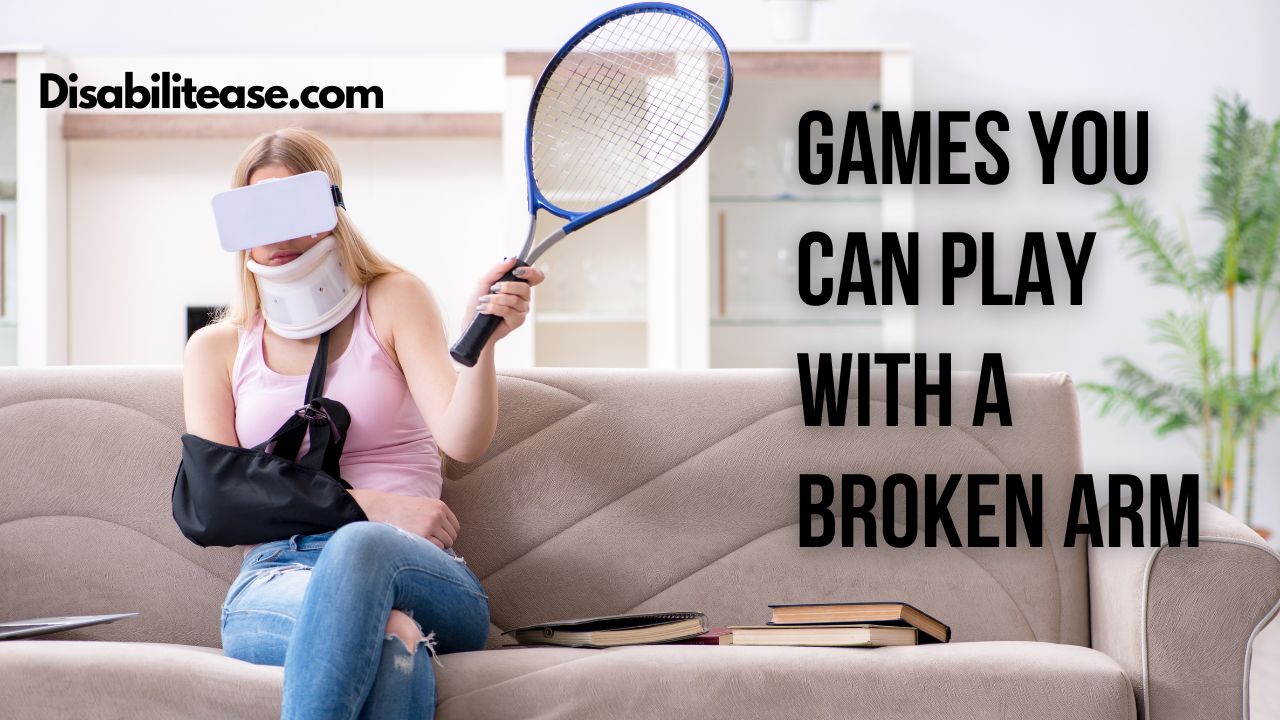 The arm and wrist get most frequent injuries or fractures. The effects of this kind of impairment may be disastrous for everyone, but especially for people who otherwise like to stay active and involved in gaming activities.

Nevertheless, there is still some optimism along the drawn-out path to recovery. There are games you can play with a broken arm.

Here is a related article that might interest you on How To Do Home Chores With A Broken Arm?

However, a doctor’s consultation is required before you start most of these games.

Games You Can Play With Broken Arm

Soccer is one of the most popular sports in almost all countries worldwide. The game is played by two teams, each having 11 players. Each side must get the ball into the opposing team’s goal to score a goal. Players usually hit the ball with their feet to move it towards the opponent’s goal.

The one who scores the most goals in the set time wins the match. Except for goalkeepers, no player is permitted to make physical contact with the ball using their hands or arms. Thus, soccer may be played while wearing a soft cast in case of a broken arm.

However, it is important to ensure that the injured region is safe from any risks. Such players must use protective gear when playing. To avoid further injury when playing soccer with a broken arm, you must also ensure that a padded jersey adequately covers the cast.

Bowling is another indoor game in which players roll a ball toward several pins. The goal of this game is to knock off as many pins as possible. The ball rolls over a path with a smooth, lubricated surface, called a lane, towards the pins.

Although the ball is extremely heavy, if you are an experienced player, you can play pin bowling easily since the ball is rolled with one hand.

However, it must be noted that your dominant hand must be healthy enough to roll the ball properly.

Table tennis, commonly referred to as ping-pong, is a game in which two individual players, or two groups of two players each, use small rackets to strike a lightweight ball across a table back and forth.

A net divides the table on which the game is played. Players should let a ball hit toward them until it bounces once on their side, except the first serve, and then hit it with the racket such that it bounces at least once on the other side and returns to the opponent.

When the opponent fails to return the ball by the game’s regulations, a point is earned by the other player. The one who achieves the goal score first wins the match.

The small size of the racket, it is easily held with one hand and thus, is an ideal sport to be played if you have a broken arm or wrist.

The game is played on a square board with 64 alternately colored squares, known as light and dark squares, arranged in eight rows and columns. Chess pieces come in two distinct colors, with the light color referred to as “white” and the dark as “black.” Each of the two sets has sixteen pieces, each of which may move differently.

Except for castling, which involves moving two pieces every round, each player takes turns to mode one piece. A piece is moved to an open square or one already occupied by another piece of the opponent, which is then “killed” and eliminated from the game.

The one who manages to seize (kill) their opponent’s king piece is considered to be the winner. Since all actions, excluding casting, must be performed alone with one hand, chess is an ideal game that can be played safely with a broken arm while indoors and thus, away from any movement-related risks.

It is also a great way to use your strategic thinking, which can help you pass the time while your arm is recovering.

Carom is a popular game played by families and gatherings in South Asian countries. It is on the list of games to play with a broken arm. Carom comprises a square board with one pocket in all four corners.

Pool and other “strike and pocket” games are comparable to rebound because they both employ rebounding, angles, and blockage of the opponent’s pieces. When struck by a Striker of a specific size, which is bigger and heavier, Carom discs (or men) are supposed to slide over the board into the pockets.

The first person to collect every piece of their selected color wins. But none of the players can win until one player covers the Queen (the red disc). For this, a player should instantly pocket at least their pieces after pocketing the Queen.

Since the striker is struck with a finger flick (or slid using one hand), this tabletop game can also be easily played with one hand. It is a fun and immersive way to bring the whole family together, including children and adults.

A round target board is the main object of the game of darts, in which players throw small pointed darts with their bare hands to hit the target.

Certain defined spots on the board may be struck to gain specific points, yet contrary to other target sports such as archery, these spots are dispersed over the board and follow the rule that points increase toward the center of the board.

The darts are thrown towards the target using only one hand; thus, as long as your broken arm isn’t your dominant one and is adequately protected, you can easily play and score in this game.

Checkers is a strategy-based board game played by two players and includes diagonal moves of standard game pieces and required captures by leaping over the opponent’s pieces.

One of the players has the dark pieces, while the second has the light-colored ones. Both take turns to move their pieces without touching that of their opponent. A move is when a piece is moved diagonally to an adjacent vacant square.

The opponent’s piece is captured (and eliminated from the game) if it is present in a neighboring square by hopping over it to the empty square directly behind it.

Only a diagonal motion is permitted for a piece to enter an open square. The player with no pieces or possible moves remaining loses the game.

Since pieces for this game are tiny and can be moved by one hand without effort, checkers is another board game that can be played safely indoors while your broken arm is recovering.

Table maze is the best game to play with a broken arm. A table maze is a simple maze or labyrinth made on the surface of a table, and the player has to take an object (usually a metal ball) from the starting point to the end of the maze.

The design of this table is usually made such that the surface can be titled using knobs for moving the ball throughout the maze.

These knobs can be easily moved by one hand and are usually made for children, so the game requires less physical effort and more concentration, all of which make it a perfect game to be played by one hand while staying at home and healing.

A crossword is a type of word puzzle that often consists of a rectangular grid divided into black and white squares. The player has to find the answers to the clues given in the puzzle and fill the white squares with alphabets to make words or sometimes sentences.

These answers are arranged in the grid from left to right (“across”), considering that the language used is where the letters are written left to right and top to bottom (“down”).

The words or sentences are divided using the shaded black squares.

This puzzle is usually done on paper, and unless you have injured the dominant hand that you used for writing, you can play crossword puzzles easily and safely, even from the comfort of your bed or couch.

Another post that will interest you is about the Errands To Run With A Broken Arm.

Along with these games, there are several mobile games, especially puzzles involving running, which can be played with one hand as well.

However, if you are opting to avoid long screen time, several children’s games can be played while you are inside your home. Bonus?

You can also involve your children or younger siblings in these games to transform a boring and depressing recovery period into some happy memories. Some of these games include:

Living alone with a broken arm can be disastrous. But hope is the only way to go. Not all is lost in terms of entertainment and good activities when you have a broken arm.

Our list of best games to play with a broken arm will keep you occupied in a good way.